Five Cylinders and just 124cc .  A normal rev limit of 21,500 rpm – and another 500 rpm still left for the last lap dash to the line – eight-speed gearbox and a race weight of 85 kgs (187lbs) mean that the Honda “5” was the absolute limit of motorcycle engineering in 1965.
In every race, the Honda sounded as if it was operating on the last 1% of what a motorcycle could achieve before it self-destructed – although in fact it was utterly reliable. By contrast, the iconic Honda 6 always produced calmer, more controlled mechanical music – like a tenor singing soprano – while the “5” was a wailing, frenetic, Punk Rock lead singer. The key to the “5” was Honda’s highly developed 50cc Twin which had a bore and stroke of 34mm x 27.4mm. Two of the Honda pistons would fit on a credit card and with room to spare. Each of the four valves which fed the cylinders weighed less than 10 grams – or the same as a couple of grapes. With a bore of 34mm, Honda hit on the idea that 5 x 25cc cylinders would become a world beating 124cc engine – in effect, two and a half 50cc Twins. Honda knew a lot about getting minuscule cylinders to fill effectively, and very high revving engines to stay in one piece and so were comfortable with an engine spinning routinely to over 22,000 rpm and they were also very familiar with the eight-speed gearbox needed by the 125cc to keep it within the 1000 rpm power band.
Nobby Clark was the only non-Japanese mechanic to work on the “5” and remembers the bike with fondness. “I liked the ‘5’ a lot – except for having hands which were too big! Everything was so tiny that parts disappeared in my fingers, the parts were so small. The valves looked more like carpenters’ nails than poppet valves from a motorcycle engine. “The ‘5’ was a really nice bike and very reliable. We refreshed the motor every 800 km (500 miles) with a new crank, pistons, valves and so on but the eight-speed gearbox was left alone. “People used to ask me for a piston for a souvenir but we always destroyed the crown because the design was top secret. The pistons arrived from Japan part finished and we filed them by hand, and then satin finished them with emery paper, to match the squish band in each individual cylinder head. “This was an enjoyable job because part of my annual trade test for Rhodesian Railways was to file a 1-inch square section of mild steel round within a tolerance of 5 thou (0.005” of an inch) so working on the pistons was not a problem. 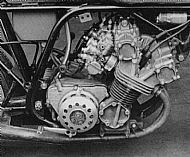 Look at the included valve angle!

And here's a link to one of them starting up